Closely connected by road and rail, Reigate and Dorking are two historic market towns in the Surrey Hills, offering a wealth of shops, businesses, schools, entertainments and sport. Both have a thriving arts scene, excellent places to eat and drink, as well as a brewery, distilleries and even a vineyard! Come and take a look around. 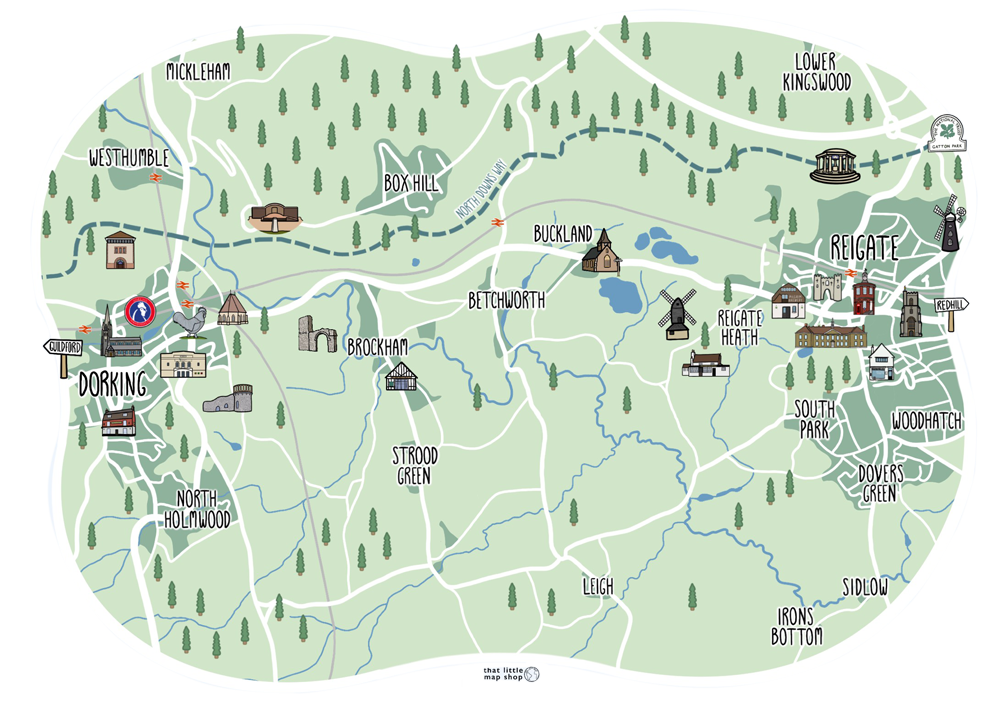 Caves, coffee and heaps of history

REIGATE is a wonderful place to live. Snuggled at the foot of the North Downs in the borough of Reigate and Banstead in Surrey, Reigate is less than 20 miles south of London and is surrounded by breathtaking countryside.

Once mentioned in the 1086 Domesday Book as Cherchefelle (the open space by the hill), Reigate is a historic market town with listed buildings such as The Old Town Hall and The Reigate Priory. During the First World War, explosives were stored in the tunnels beneath the town and during the Second World War, local residents used them as air-raid shelters. Today you can take a guided tour of the Reigate tunnels.

Famous Reigatians include the ballerina Margot Fonteyn and actress Caroline Quentin, who were born here, David Walliams and Norman Cook, who went to school here, and at George Best and Spike Milligan, who both lived in Reigate at some time in their lives. It was also the setting for a Sherlock Holmes story, The Adventure of the Reigate Squire.

But it's not just the past inhabitants that make Reigate special; this is where the journey of The Surrey Circle began. The town boasts a close-knit community and the wide variety of local businesses provide products and services to offer you a personal touch and a unique approach.

Whether you're a resident or visitor, here are some useful hidden gems and titbits of information to help you live, breathe and love Reigate: 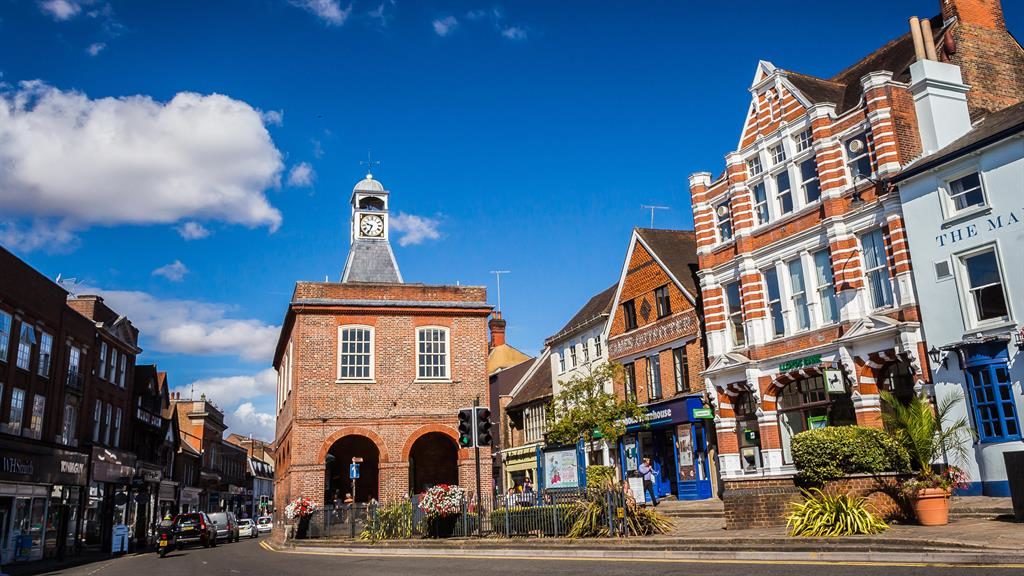 It's impossible to overlook Priory Park and its abundance of green space, as well as the lake that is home to various waterfowl. Take a walk up to the ridge in the woods behind the park.

Take a stroll at Reigate Hill and marvel at the stunning views, or head to Earlswood Common and walk around the lakes or hire a pedalo.

Walk the lake's circuit at Mercer Country Park, a short drive away, or join various watersports.

At nearby Buckland, participate in open water swimming or paddle boarding and let the kids enjoy the woodland adventures.

Go underground in the Reigate Caves, but plan your visit as they're only open to the public five times a year.

Reigate is serviced by The Wall House Surgery in Yorke Road, with other GPs available in nearby Redhill. East Surrey is the nearest hospital and A&E facility two miles away, and Epsom Hospital is just six miles away. Both are open around the clock.

A list of NHS dentists in Reigate can be found here.

Whatever age your children are, you'll be spoilt for choice when it comes to schools and childcare in Reigate. There are various nurseries and a Montessori nursery in town, and the following options are available for school-age children:

Reigate is blessed with several excellent sports clubs. Reigate Priory Cricket, Football, Tennis, Hockey, Lacrosse, Bowls and Croquet clubs are all situated in one beautiful venue in Park Lane, with Old Reigatians Rugby Club next door. Reigate Rugby Club is in Colley Lane to the west of town and South Park Football Club is to the south.

Cycling is very popular in Reigate, with lots of local rides on and off road, including the iconic Box Hill – used for the 2012 Olympic cycling – a short ride away.

There are active clubs for a range of other sports, including swimming, fencing, martial arts and a variety of exercise classes.

Reigate has a vibrant music scene, with several pubs putting on regular live music, along with The Yard @ Reigate Station and New Music Nights, which puts on original live music every month, as well as an annual summer festival.

The Reigate & Redhill Music and Drama Festival is an annual competition run over two weeks in May, recognising local talent in various disciplines.

East Surrey Operatic Society & Opera Club of Reigate and Redhill (ESOSOC) puts on regular concerts and has a popular youth musical theatre section, YESOS, which puts on a fully staged musical during the summer holidays.

At The Surrey Circle, we showcase and support our local businesses and believe that their contribution adds to the town's charm, uniqueness and appeal.

To get to know them, please visit our Business Hub.

DORKING is a historic market town, famous for its abundance of picturesque open spaces, antique and poultry trading and being the home to England's largest vineyard. Surrounded by the Surrey Hills Area of Outstanding Natural Beauty on three sides, it's only 21 miles from London.

History is everywhere in Dorking, from a centuries-old pub featured in Charles Dickens’ Little Dorrit to the blue plaque highlighting the last remaining house of a Pilgrim Father. The Romans introduced chickens to Dorking and on the Deepdene roundabout sits the Dorking Cockerel, a symbol of the town's poultry breeding prowess, popular here well into the 19th century.

Dorking was the birthplace of actor Laurence Olivier and was once the location of Strawberry Studios South; an old cinema converted into a recording studio by the band 10cc. Famous musicians, including Paul McCartney and Cliff Richard, recorded there until it was closed in the nineties.

And the Olympics have touched the history of Dorking. In 1948 and 2012 the torch relays passed through the town and in 2012 Dorking and Box Hill were used for an Olympic cycling event.

Dorking is also the home to many local, independent businesses, which offer unique products and services and bundles of personality and variety.

Regardless of whether you're a local or just passing through, here are some helpful pieces of information to help you experience and enjoy exciting Dorking: 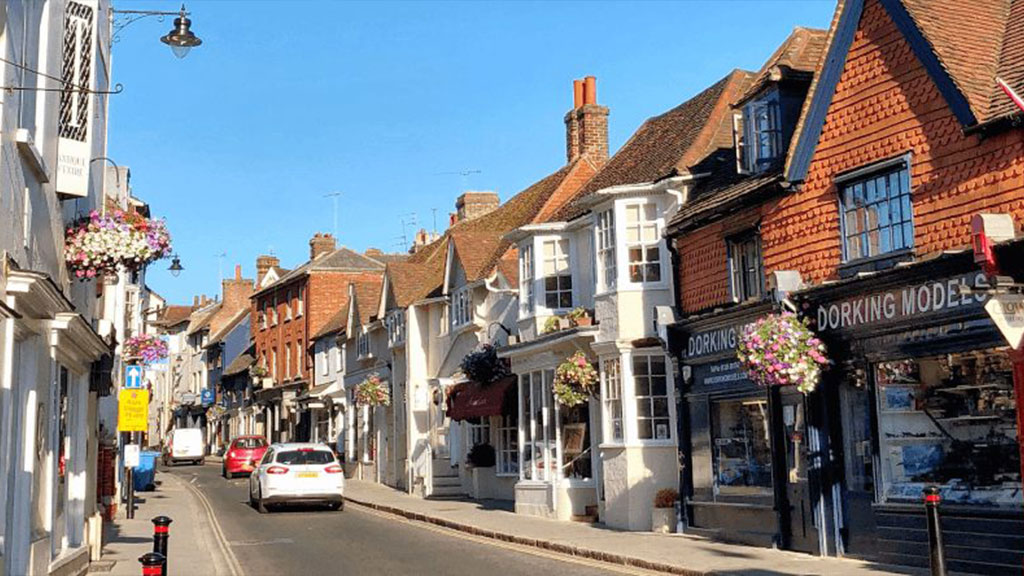 Every Friday the traditional Dorking market hits town! From medieval times, Dorking has been famous for its large cattle, corn and poultry markets, and in St Martin's Walk, there are fresh fish and fruit and vegetable stalls amongst others.

In and around the High Street are local clothing shops, galleries, cafes and restaurants, and a wide selection of antiques outlets on West Street.

Don't miss the wonder of The Holly and Laurel Emporium, an endless Aladdin’s cave of unique pieces for the home. Dig around in the 18th-century coach house, filled with over 40 local independent businesses.

There are also buses to Guildford, Horsham, Redhill and Kingston upon Thames.

Try the outdoor fitness equipment at Meadowbank Park, take a walk around the pond or let the kids whizz around the park.

Visit Dorking Halls to see a film, a show, stand-up comedy or one of the many other entertainment options.

Dig into history at the museum or brave the South Street caves.

Walk from Dorking town centre to Deepdene Gardens. It's free to visit and there are many walking trails. It’s steeped in history as it was pivotal as a communications hub in the Second World War.

Find the secret Tillingbourne Waterfall, hidden away but worth the search. Located on private land, you can park at Broadmoor car park, go on the hunt and view it from afar.

Visit one of the local National Trust sites and revel in the picturesque Surrey scenery:

There are many GP options in Dorking, including Dorking Medical Practice, North Holmwood and Riverbank surgeries.

A list of NHS dentists in Dorking can be found here.

Dorking is well blessed with a semi-professional football club, Dorking Wanderers, and a large and prominent rugby club, Dorking RFC, both about a five minute drive out of the town centre.

Dorkinian FC and Dorking Cricket Club share a lovely ground in Pixham Lane, overlooked by picnic makers up on Box Hill, and Old Dorkinian Cricket Club has its home to the south of town.

Cycling is very popular in Dorking, with lots of local rides on and off road, including the iconic Box Hill – used for the 2012 Olympic cycling.

Dorking Halls is the main entertainment venue in town, with regular shows from well known musicians and comedians, and you can enjoy live music in several of the local pubs, including The Spotted Dog, Kings Arms and The Old House.

Leith Hill Musical Festival is an annual competition for amateur choirs, which has been running since 1905 and takes place in April at Dorking Halls.

Your local area in Surrey could benefit from joining The Surrey Circle - we'd love to chat!